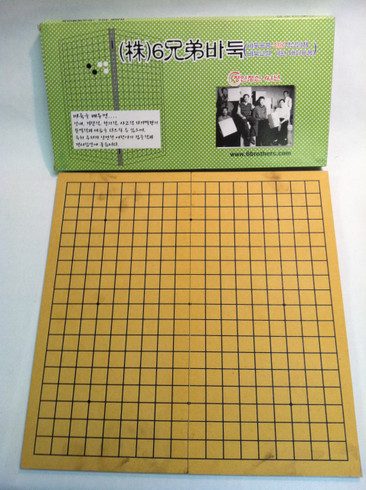 Two Game Board (Go & Xianqgi) - A flip board game one side for Go/baduk and the other side for Xianqgi. The whole board is 16x16inches & ½ inch thick. When the board is closed it is 8x16inches & 1 inch thick. All game pieces are sold separately. Made In Korea.

Go (weiqi in Chinese, igo in Japanese baduk in Korean), is an ancient board game for two players that originated in China more than 2,000 years ago. The game is noted for being rich in strategy despite its relatively simple rules.The game is played by two players who alternately place black and white stones on the vacant intersections (called "points") of a grid of 19×19 lines (beginners often play on smaller 9×9 and 13×13 boards). The object of the game is to use one's stones to surround a larger portion of the board than the opponent. Once placed on the board, stones can only be moved if they are captured. When a game concludes, the controlled points (territory) are counted along with captured stones to determine who has more points. Games may also be lost by resignation.

Xiangqi also known as Chinese chess, is a Chinese two-player strategy board game in the same family as Western Chess, chaturanga, shogi, Indian Chess, and janggi. It is one of the most popular board games in China. Besides China and areas with significant ethnic Chinese communities, xiangqi (cờ tướng) is also a popular pastime in Vietnam.The game represents a battle between two armies, with the object of capturing the enemy's general (king). Distinctive features of xiangqi include the cannon (pao), which must jump to capture; a rule prohibiting the generals from facing each other directly; areas on the board called the river and palace, which restrict the movement of some pieces; and placement of the pieces on the intersections of the board lines, rather than within the squares.

All prices are in USD. © 2021 KORRICE INC. . Sitemap | Shopping Cart Software by BigCommerce